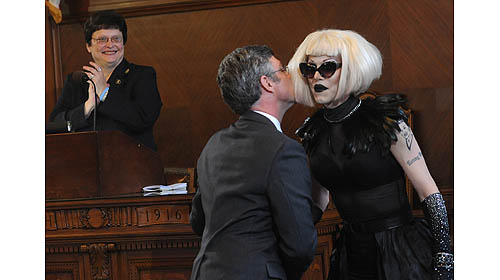 for real! how awesome is this? june 12th is now officially sharon needles day in pittsburgh.

and here’s the proclamation:

WHEREAS, Ms. Sharon Needles emerged in Iowa, but made her permanent home in the Bloomfield neighborhood of Pittsburgh, where she began her professional performing career as a Pittsburgh nightlife celebrity; and

WHEREAS, Sharon Needles is a staple of Pittsburgh’s entertainment underground, a member of the Haus of Haunt – the creepiest performance troupe around, and an ambassador to the world as one of Pittsburgh’s most glamorously ghoulish faces; and

WHEREAS, Sharon’s performance and victory on Logo TV’s nationally televised and widely popular television show “RuPaul’s Drag Race” was yet another win for The City of Champions, one that draws attention to the accomplishments of one of Pittsburgh’s often overlooked demographics; and

WHEREAS, Ms. Needles uses her performance and her art to push the envelope, intending to spark discussion that breaks down barriers created by discrimination, as well as stereotypical portrayals of members of the drag community; and

WHEREAS, through her success, Ms. Needles has demonstrated that, while being considered “different” may be difficult to endure during one’s early years, there exists an opportunity to harness the most unique pieces of oneself to produce thought-provoking art and much-needed social dialogue appreciated by admirers across the country; and

WHEREAS, in accordance with Ms. Needles’ words upon being crowned winner of RuPaul’s competition, “This crown is for anyone who was picked on as a kid,” and, similarly, the fact that Ms. Needles stands as an example of a fearless but humble artist, sharp-witted social critic, and just one example of the diverse range of citizens that Pittsburgh is proud to call its own; and

NOW, THEREFORE, BE IT RESOLVED, that the Council of the City of Pittsburgh does hereby honor Sharon Needles for her fearless commitment to her craft, and does congratulate her on her achievement as champion of “RuPaul’s Drag Race,” through which she has gained widespread notoriety for herself and the City of Pittsburgh; and

sources: proclamation from out magazine, photo from pittsburgh post-gazette